With so many rigs used over the years you can imagine there have been many antennas also.

It all started with a 10 element WISi 144 MHz antenna inside my room on the second floor. I was´t licened at that time and used it to listen to transmissions of the local hams of my DARC club in Hanau (F09) in FM. Soon after that i moved to the third floor, got my licence for VHF UHF transmissions and had the first antenna on the roof. 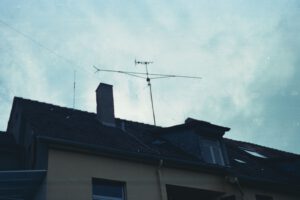 Left of the chimney you are able to see a very faint image of my first HF Antenna a Fritzel GPA 3. I used that antenna for quite a while and i still own it and sometimes use it on my outdoor activations.

I just found out that the next step must have been a stacked 19 element F9FT (Tonna) groupe (19 above 19). To be honest i can not remember that one but found a picture. And at that time i loved stacked Yagis. 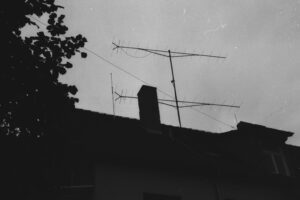 It started with that mentioned Fritzel GPA 3 (See picture above). I guess i made my first 100 CW entities for CW DXCC with this antenna.

After that i got my first beam for HF. I was a homebrew 3 element monoband Yagi for the 10 meter Band. So mast nr. 2 arrived on my roof 😀 .

Now it is getting so confusing that i will only document major steps to the status quo now.

I am now using 4 antenna masts two of them on the roof and two in the garden.

It is located where the original VHF Mast used to be. I was able to buy a used Flammex Pull antenna mast in summer of 2000 from Frick Gerätebau in Seligenstadt. This mast can be extended in 3 stages. It is holding most of my VHF UHF antennas now.

On this mast there is a 10 over 10 stacked 144 MHz Yagi groupe from Konni Antennen in Esselbach. I used Konni Antennen over many years but they seem to be out of buissiness in the mean time. Or at least i am not able to find any homepage from them. Too bad, i really liked Konni Yagies.

On this mast there is also a Yagi for 23 cm. I am not sure about the brand.

Here is an old picture of that mast. I will upload new ones in the future. 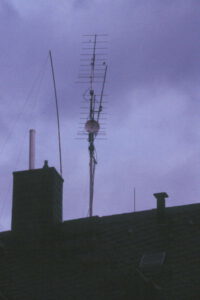 I planned to modify this mast in the future. (Hopefully in 2021).

This is how it looks inside the roof: 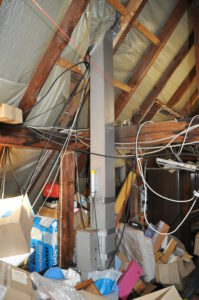 Because I needed a second antenna mast I built a second mast on the south side of the roof. In contrast to mast 1, the whole mast is rotated by an antenna rotor inside the roof.
On this mast was originally the above mentioned 3 element 10 meter Yagi. But because the conditions on the short wave bands became worse I decided to replace it with used 3 element 3 band beam. A Cushcraft A3. I had to reconstruct the driving element 1990 becouse Wiebke destroyed it in spring of 1990. I used a sturdier fiberglass tube than was originally installed by Cushcraft..

Above the beam there is 20 over 20 stacked Yagi antenna for 70 centimeters, also from Konni Antennen.

Here are pictures showing the antenna rotor and a ball bearing that turns the mast. 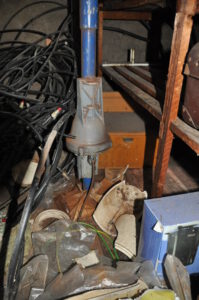 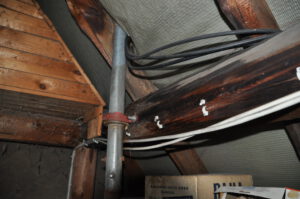 I autumn of 2002 i I bought a used Fritzel BP 60 lattice mast. It was erected in the garden near the house.

Here are some pictures of the creation of the foundation. I had to dig out 5 m² of soil and the made a iron cage for the foot:

After finishing the project i put my abouve mentioned homebrew 10 Meter 3 element Yagi on the mast. I had it on the mast till the sunspots didn´t allow 10 meter QSO´s on a regullary basis. Then i replased it with a 4 element monoband Yagi for 15 meter. (ZX Yagi ZX 15 – 4).

You are able to see it on the right side of the picture.

Time went and we had even less sunspots so i decided to swich antennas again. It is so convenient to do so using the BP 60 mast. My choice was a Optibeam OB 9-5. I really like this antenna. It is also the first beam i used over the years.

Here are some pictures: 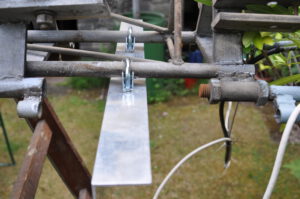 A year after modification of mast 3 i decided that the will be just another mast. Its mast number 4 sitting on the bank of the river. I use it as the end point of my dipole and longwire antennas. It is just a simple tubular mast that can be tilted. This time I built everything myself. The tipping device was built from scrap from the local scrap dealer. 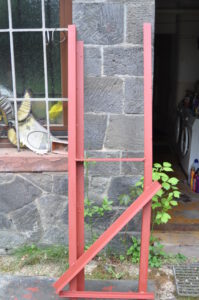 After some more digging and concrete pooring the mast was ready. 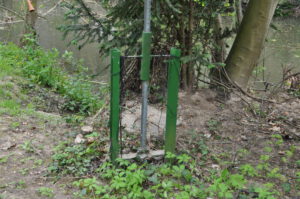 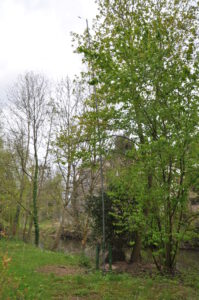 In addition to these directional antennas, I also use endfed longwire antennas. I use 38 meter long wires, which are fed with a fox circuit (Fuchskreis).

I used two of these longwire antennas till winter 2020 – 2021 when a winter storm took one of my LW antennas down.

Bad thing about is that i used these two LW antennas in combination as a full size dipole antenna for 160 meters.

I use this LW (long wire) antennas since the beginning of my shortwave career and also used them in W7 during my stay in Flagstaff AZ and in VK2 during my stay in Armidale NSW. They are pretty easy to construct and you only need that abouve mentiond matching divice. I use two of them in my shack: 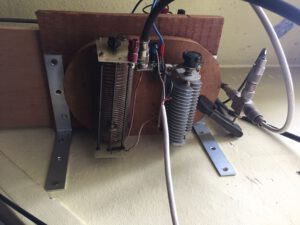 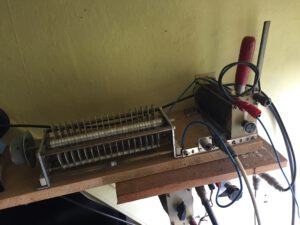 Antenna used for portable use

As i mentions ther are also activations outside the shack (See the Acitvities outside chapter). I normally used endfed LW antennas in the past but in my activitations of WWFF and POTA i used also a short endfed antenna driven by a 10:1 UNUN.

It is a quick and dirty solution that workes pretty good. The emitting element is 41 ft (12,5 Meter) long and the radial 17 FT (5,2 Meter) long. I have this dimensions out of an YouTube video. The driven element is supported by a fibreglass pole that can be extended to 10 meters long. You can find heaps of them in the ham radio distributors.

If you are interested in antenna theory I can recommend these books and articles: